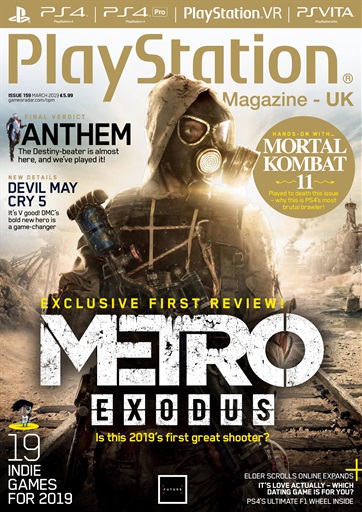 Do you want to connect with other gamers? Social gaming networks are ment to connect gamers, helping them to make new friends, creating gaming communities and expanding the reach of gamers from games to the outside world. One of the hot social gaming network in 2019 is GamerIDs, i recommend you to visit them and have fun meeting fellow gamers, make new friends and chat. A lot more of social connections can be made at GamerIDs.

At GamerIDs you can meet people playing all the new cool games of 2019, from which we will present some , adding some latest news from the gaming industry. Metro 2033 and Metro: Last Light were two pleasant surprises, so the upcoming Exodus iteration is eagerly awaited by passionate first-person shooters with post-apocalyptic decor and survival elements. Artyom, the hero of the first two games, leaves the dark and dangerous maze of the Moscow Underground and ventures on a surface journey through a war-torn setting with members of the Spartan Rangers faction. So far we have been promised levels with a combination of the old linear design and an open world, better options for customization of weapons, realistic day / night cycle and seasons that will accompany the long journey of almost a year. Metro Exodus will arrive sometime on February 15, 2019 on PC, Xbox One and PlayStation 4.

Described in as few words as possible, Far Cry New Dawn could be called “Far Cry Merges with Fallout.” A continuation of the already well-known Far Cry 5, the game will feature the same fictional Hope County region of Montana, USA, but this time things are no longer as beautiful. The action takes place 17 years after the nuclear war that broke out at the end of the previous game, and the map is about the same, but some regions have now become accessible while others cannot be crossed. The player, who can customize the character as he pleases, will enter a world where people are trying to survive and rebuild what was lost in the war, the antagonists being a gang of bandits led by two sisters. The game will hit PC, Xbox One and PS4 on February 15, 2019.

Gamerids a unique gamer network.You can add games to your list, meet new players and follow the game news with Gamerids.Join our exclusive Gamerids community today. Read extra info at Social Gamer Network. We’re a little team that likes to play games like you. We work harder every day to take advantage of our services. You can join us to support us. If you want to give us more support, you can be a patron. Please do not hesitate to contact us for any problems.

Restarting the Doom universe of 2016 has brought us one of the best shooters of the last ten years, ID Software taking over all the elements that have delighted players since 1993 and offering powerful weapons, fast movements and aggressive monsters. DOOM Eternal will take over the new elements of Doom 2016, such as the purchase of ammunition and health from aggressive charges or violent glory kill executions, but will also bring new items, such as a shotgun attached hook that can be used to shoot. enemies in the battlefield, the possibility of climbing on the walls with the same element or massive monsters that will suffer visible mutilation when attacked. The multiplayer was not forgotten either, the player being able to enter the single player game of others as one of the monsters. The action on Mars moves to Earth, the hero of the Doom universe now having to defend the home invasion planet. DOOM Eternal will arrive on PC, PS4, Xbox One and Nintendo Switch in 2019.

By placing a greater emphasis on the role-play element than the eleven other major titles in the series, Odyssey places its players in 431 Before Our Era and puts before us a fictionalized version of the Athens-Sparta war. The player can choose the gender of the character, he has the opportunity to choose different options in quests that will lead him to different endings, he has available a system of abilities that he can develop as he pleases and he must take care of reputation. Other new features are the special hit system introduced in Origins and naval battles. The game will be available on PC, PlayStation4, Xbox One and Nintendo Switch. Source: https://www.gamerids.com/.